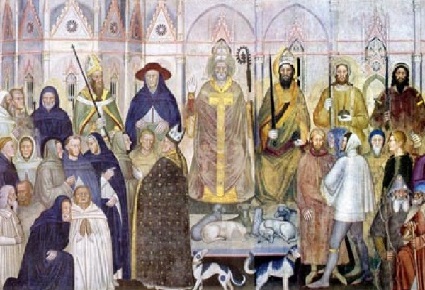 The term “Gregorian Reform” is a general name for a series of disciplinary reforms enacted under the pontificate of Pope St. Gregory VII (1073-1085). The core reforms of the movement were enforcement of clerical celibacy, ending simony, and pushing back against lay investiture. While most discussion about the Gregorian Reform has been devoted to these three issues (especially investiture), the correspondence of Gregory VII reveals a whole host of additional matters the energetic pontiff hoped to reform. This essay will focus on Gregory VII’s vision for reforming the Sacrament of Penance.

The core text we will be examining is Pope Gregory VII’s letter of November 25, 1079, to the bishops and barons of Brittany on the reform of the penitential system. This text is the tenth letter in Book Seven of the Registrum, the compilation of the correspondence of Gregory VII. All citations are from Registrum, Book VII, Letter X.

The Object of Reform

The Sacrament of Penance is comprised of several components; tradition identifies four: Contrition, Confession, Absolution, and Penance. For sake of clarifying our terms, some brief definitions are in order:

Contrition: The sorrow for sins which the penitent brings to the sacrament. A key component of contrition is the firm resolution not to commit the sin again. Contrition is internal, but it must be manifest externally (i.e., the confessor must have good reason to believe the penitent is truly repentant).

Confession: The verbal confession of all known mortal sins by the penitent to the confessor.

Absolution: The absolution of the penitent’s sin pronounced by the priest, the act of which constitutes the remission of guilt for every sin that was confessed.

Penance: An act of penance or satisfaction pronounced by the confessor and binding on the penitent. The penance is both remedial and reinforcing: it remedies the disorders in the soul caused by past sin, and reinforces the soul against future sin.

Thought he does not use the word “contrition” in his letter, it is clear that the reform Pope Gregory had contrition in mind when he penned his letter. The pontiff complains about “fruitless penance”, which he defines as “one that is accepted in such a way that the sinner may remain in the same or worse or only slightly less wicked sin.” This has to do with an insufficient resolve on the part of the penitent to abstain from sin in the future.

What sorts of problems did Pope Gregory identify with the way contrition was understood?

Gregory begins his letter by alluding to the sad state of the Church in general, which has trickled down into a deficient understanding of the Church’s vision of penance. He says:

“…the highest office in the Church has for a long time been in a state of collapse by reason of sin, partly through the inexperience, partly through the negligence of the clergy. In consequence, countless evils have sprung up, as it were from a corrupt root. So that down to the present time, among other ills that have cropped up, a false system of penance has become established.”

What are the characteristics of this “false system of penance”? The false system Gregory identifies consisted in a kind of cognitive dissonance whereby a penitent could confess his sins and receive absolution whilst simultaneously continuing to engage in sinful activity with no intention of stopping. Gregory tells the bishops:

“In this matter you yourselves should take especial care and give warning to others that if anyone having become involved in murder, adultery, perjury, or any similar crime shall persist in the same; or shall take part in any transaction which can hardly be carried through without sin; or shall take up arms except in defense of his own rights or those of his lord or of a friend or of the poor; or in defense of churches and with the advice of men of religion who know how to counsel wisely in view of their eternal welfare; or shall illegally hold the goods of others; or shall have shown hatred against his neighbor—such an one can in no wise bring forth the fruits of true penance.”

Analysis involves a spot of conjecture, because we do not know the specific incidents which prompted the pope’s letter. The context, however, does not make it difficult to guess. Penitents were going through the motions of confession without sufficient contrition; they desired absolution and access to Holy Communion without having to give up their sins (for example, a man committing adultery confesses his adultery but has no intention to give up his mistress; an avaricious baron confesses his plundering but fully intends to continue plundering). That this problem merited a papal intervention suggests the occasions must have been quite brazen—i.e, the penitents made no effort to conceal their intentions from the confessor. And the priests of Brittany, “partly through the inexperience, partly through the negligence”, were absolving such penitents despite knowing full well they intended to keep on sinning.

It is this arrangement which Pope Gregory VII called “fruitless penance, one that is accepted in such a way that the inner may remain the same or worse or sonly slightly less wicked sin.” This he calls “a pretense and not penance”; it is a sham, a mockery of the sacrament that goes through the motions of confession but “can in no wise bring forth the fruits of true penance.”

To redress the evils of this system, Gregory commands the convening of a regional synod dedicated to the problem:

“Wherefore, since it belongs to us in virtue of our office and the abundance of our anxious care to set right these and similar evils by God’s aid, we desire and command that Your Fraternity summon reverently our legate Amatus, bishop of Oleron, to whom we have entrusted our representation in your region, and that through his agency a local council may be brought together at which, among other questions pertaining to the salvation of souls, the subject of penance may be thoroughly discussed.“

Gregory concludes his letter by reminding the Briton bishops of the authentic principles of penance:

“…if anyone desires to perform a proper penance, he must needs go back to the origins of his faith and with watchful care keep the promise made at his baptism, namely, to renounce the Devil and all his works and to believe in God, that is, to have the right idea of Him, and to obey His commandments. Whoever, therefore, shall do penance in this manner, since to do otherwise is a pretense and not a penance, to him we, relying upon our apostolic power, grant remission of his sins and moreover, trusting in the mercy of Almighty God, we promise him the enjoyment of everlasting bliss.”

Were the problems Gregory addressed in his letter to the Briton bishops indicative of a general problem throughout the Church, or were they rather a characteristic of the Church in Brittany in particular?

Though the letter is addressed “to the bishops, clergy, princes and all other inhabitants of Brittany”, we may presume the pontiff is meaning to address a general problem that was presumably widespread throughout the western Europe. This is deduced from two points:

First, Gregory makes no indication that the problem is confined to Brittany. In the introduction to his letter, he begins with the general disarray throughout the Church, which he refers to as a “state of collapse.” He says that the sad condition of the sacrament of penance is an effect of this general state of collapse. It stands to reason if the cause is general, then so too is the effect.

Second, we may infer this from the letter’s inclusion in the Registrum. The Registrum was not a general collection of all the letters of Pope Gregory VII; rather, it is a selection of what the historian Geraldus Cambrensis (1146-1223) called causae magis arduae, “more difficult cases” (1). The Registrum was thus meant as a collection of key cases the pope intended to be used for reference; in other words, they were intended as legal precedents. The letter may have been written to a specific episcopate, but Gregory intended it’s principles to be applied broadly as precedents throughout the western Church. Therefore, we may assume the problems addressed therein were widespread, and that this letter was indicative of a desire for a general reform of the manner in which contrition within the sacrament was understood.

Gregory’s letter to the Briton bishops is certainly not sufficient to give us a comprehensive view of the practice of the Sacrament of Penance during the late 11th century. Nevertheless, it pulls back the curtain on an important discussion about the nature of contrition and how the problem was tackled by the Gregorian Reform.

(1) The Correspondence of Pope Gregory VII, translated with an introduction by Ephraim Emerton (New York: W.W. Norton & Company, 1969), xix. All quotes in the article are taken from Emerton’s book; Book VII, Letter 10 is found on pages 147-148.