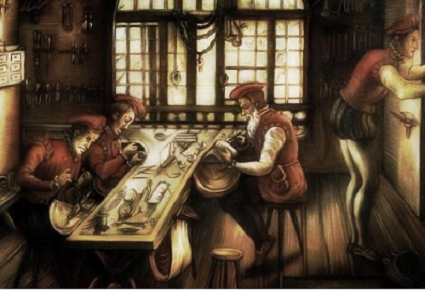 For most of Church history, the popes were not only the successors of St. Peter, but the temporal heads of the Papal States, a conglomeration of territories in central Italy that had been under direct papal governance since Carolingian times. The popes ruled these lands as political sovereigns. As such, it was common for popes to strike their own coinage, similar to how any secular prince would have minted coins within his realm. In this article, we will take a look at a few samplings of papal coins from the Renaissance era through the Baroque, discussing the sculptors and goldsmiths who designed them, the popes under which they were minted, and the depictions upon each coin. A note on the images: I chose these particular coins because they are on display at the University of Michigan’s Museum of Art in Ann Arbor and I was thus able to view them in person. The pictures, although somewhat fuzzy due to poor lighting, are my own photographs.

Papal coins were not usually struck with the intention of being used as currency; currency in the Papal States during this period was the scudo (a coin first struck during the time of Charles V and in circulation until 1866). The papal coins were more akin to what we would now think of as commemorative coins. They were struck on special occasions; most of the coins we will examine were minted upon a pope’s election. One, Cheron’s coin for Clement IX, commemorates the dedication of the new angel statues on the Pont Sant’Angelo in 1669. The coins are often referred to in contemporary sources as “medallions”, to distinguish them from the regular sort of coinage used as currency. Not to say they did not have real value as currency; they certainly could and would be exchanged as currency, but that was not their primary purpose and they were never meant to displace the prevalent Italian scudo.

Let us consider the first coin, from the middle-Renaissance pontificate of Nicholas V (1447-1455):

This coin was designed by Andrea Guacioloti (1435-1495). Guacioloti was a coin-maker from the town of Prato in Tuscany; the Latinized version of his name appears on the bottom of the coin. This coin was minted in 1455, the last year of Nicholas’ pontificate. Pope Nicholas reigned during a period when the Church was just beginning to recover from the terrible effects of the Great Western Schism. A renowned scholar, Nicholas V desired to transform Rome into a center of art and culture. He patronized the blossoming Humanist movement and promoted scholars to important clerical positions within the Curia. He also presided over the Church during the time of the final Fall of Constantinople, when the Greeks declared they would rather submit to the turban of the Turk than the tiara of the pope.

Overall, Nicholas’ papacy was a time of great transformation and growth for the Church; the cessation of the Great Schism and the burgeoning Humanist movement gave rise to a spirit of optimism and freshness about the direction of the Church. To capture this sentiment, the obverse of Nicholas’ coin depicts the pope piloting the Church, shown in the traditional imagery of a ship, which has the word ECLESIA upon it lest anyone fail to grasp the symbolism.

Nicholas’ designs for Rome were repeatedly stifled by a conspirator named Stefano Porcaro, who made three successive attempts to overthrow the pope’s temporal authority and establish a republic in Rome. Porcaro was finally executed in 1453 after twice being pardoned by Nicholas, but the stress of these turmoils and the betrayal of Porcaro deeply strained Nicholas. He fell ill and died soon after in March of 1455, not long after this coin was minted. Incidentally, he was the last pope to be commemorated by a papal epitaph written by a successor–in his case, by Aeneas Silvius, the future Pope Pius II.

Moving on, we now turn to the pontificate of Pope Sixtus IV (1471-1484). The following coin was struck by the famous but mysterious Renaissance coin-maker, Lysippus the Younger in 1471, the year of Sixtus’ election:

The sculptor, Lysippus the Younger, is quite a mystery. He was a renowned bronze medallion artist who seems to have been active mainly during the 1470s and 80s. His real name is unknown, but he was said to be the nephew of the sculptor Cristoforo di Geremia. Lysippus’ nickname is self-conscious revival of antiquity; Lysippus the Elder was the favored sculptor of Alexander the Great. Twenty-seven of his medals survive, most of them members of the papal court, which suggests a close connection with the person of Sixtus IV. After Sixtus’ death in 1484, Lysippus quickly disappears, presumably replaced by new favorites of Sixtus’ successor. His portrait of Sixtus is personable and direct, with strong. crips lines and a care for detail.

The reverse of the coin shows the coronation of Pope Sixtus by St. Francis of Assisi and St. Anthony of Padua:

The Franciscan imagery calls to mind Sixtus’ membership in the Franciscan Order, which he joined as a youth, essentially an oblate by will of his parents. He had a further connection with St. Anthony as he had once lectured at the University of Padua, as well as many other universities, where one of his pupils was the eminent Cardinal Bessarion. The Latin inscription reads, “HEC DAMVS IN TERRIS AETERNA DABVNTVR OLIMPO”, which means “We give what is earthly, Olympus gives what is eternal.”

The next coin comes from the Baroque-era pontificate of Pope Alexander VII (1655-1667):

Designed by Gioacchino Francesco Travani, the front of the coin displays a portrait of Pope Alexander while the reverse, seen above, shows a scene of the Piazza del Popolo and the year 1662, the seventh of Alexander’s pontificate. The scene is dominated by the Egyptian obelisk of Rameses II, which was brought to Rome by Emperor Augustus in 10 BC and originally placed in the Circus Maximus. At the time of Travani’s coin, the obelisk had only been in its current location in the Piazza del Popolo for 73 years, where it had been moved during the urban redesign of Pope Sixtus V (c. 1589). The text around the side says “Sapientia in plateis dat vocem suam”, meaning “Wisdom cries out in the square”, a paraphrase of Proverbs 1:20, “Wisdom is publishing her message, crying it aloud in the open streets.” The sculptor, Travani, was the principal court medallist of the age. He was a master goldsmith, one of the three consuls of the Roman goldsmith’s guild. His medallic patrons included Ferdinando II, Grand-Duke of Tuscany, and Queen Christina of Sweden, who was converted to Catholicism during Alexander VII’s papacy.

Pope Alexander VII came from the Chigi family of Siena, one of the most powerful Italian families. He was elected in the conclave of 1655, which was famous for going on eighty days and for its clash of national and factional interests. Alexander began his pontificate with a hard line against nepotism, but soon found himself isolated and within a year entrusted the important work of state to his nephews and brothers. While Alexander devoted himself to literary pursuits, his brethren were able to enrich themselves at the expense of the papacy with little reprimand. His pontificate was hindered by the aggressive policies of the young Louis XIV and Cardinal Mazarin, as well as by the Jansenists. Alexander is remembered more for beautifying Rome with the works of Bernini than for his administration; his tomb by Bernini is one of the most resplendent of all papal tombs.

Our next coin comes from the pontificate of Pope Clement XI (1667-1669), who succeeded Alexander VII. Here is a look at the reverse side of Clement’s papal coin:

This coin was struck by the Frenchman, Charles-Jean Francois Cheron around 1669, the year of Clement’s death. Cheron was active both in Rome and Paris. He came from a family of goldsmiths; his father had been the engraver and jeweler of Charles IV, Duke of Lorraine. Cheron came to Rome in 1655 to work for the Papal Mint.  During his time in Rome he created medals of Pope Clement IX and Pope Clement X, Christina of Sweden, and Louis XIV of France. He was later recalled to Paris where he did many other fine medallions, including one of the sculptor Bernini.

Cheron’s coin depicts the Pont Sant’Angelo, which spans the Tiber and connects the Vatican to Castel Sant’ Angelo. The Roman god of the Tiber, Tiberinus, is shown at the bottom in his traditional reclining pose. The inscription says “AELIUS PONTE EXORNATO”, which is a tricky phrase but essentially means “I have properly adorned Hadrian’s Bridge”; this is a reference to the replacement of the aging stucco angels with the stone angels which remain today, a restoration begun under Clement.

It is a shame that Clement IX did not enjoy a longer reign; he was a brilliant scholar and theologian whose personal life was beyond repute. He was beloved by the people of Rome for his generosity and devoted two entire days each week in a confessional at St. Peter hearing the confessions of anyone who wished to confess. In his energy he reorganized various administrative problems and put the Vatican finances in order, but in his humility refused to allow his name to be put on any edifice erected during his reign. His premature death in 1669 after a pontificate of less than three years was deeply mourned.

The final coin we will consider was struck during the pontificate of Pope Innocent XI (1676-1689). It is a fairly straight forward profile of the pontiff that is remarkably accurate based on what we know of him from his portraits:

This coin was struck on the occasion of Innocent’s election in 1676 an was designed by Girolamo Lucenti. Lucenti was a pupil of the great sculptor Alessandro Algardi, a Roman who during his life was considered the prime rival of Bernini. Lucenti continued to work out of Algardi’s studio after the latter’s death, sharing it with other favored pupils, but he also worked under Bernini. Following his teacher Algardi, Lucenti’s sculptures are stoic and unemotional, in contrast to the extreme emotion favored by Bernini. Besides this portrait of Innocent XI, he is known for several other works around Rome, most notably the statue of the angel with nails on the Pons Aelius before Castel Sant’Angelo. His craftsmanship can also be found in the bronze bust of King Philip IV of Spain that to this day sits under the portico of Sant Maria Maggiore.

Innocent XI was a reforming pope. Elected despite strong opposition from King Louis XIV, he set his energies about reforming the administration of the papacy. He curbed the expenditures of the papal curia, balanced the papal budget, and cracked down on episcopal nepotism. He famously tried to bolster the morals of the laity by closing the opera houses throughout the Papal States and closed all theaters in Rome. It was during Innocent’s pontificate that the famous 1683 Turkish siege of Vienna occurred and the pontiff was a zealous supporter of the new Holy League. After the victory of Vienna, he contributed vast amounts to the war against the Turks and encouraged the Christian princes of Austria to expel the Turks from Hungary entirely. Lucenti’s profile depicts a stubborn, determined face, worn by the cares of his office but nevertheless resolute–and admirable portrait of this important pontiff.


The coins of this era depict the splendor and ambition of the 15th-17th century popes admirably. Each coin has a very interesting assortment of characters behind it and its own unique story. Special thanks to the UMMA of Ann Arbor for letting me photograph the coins, poor as my efforts were.